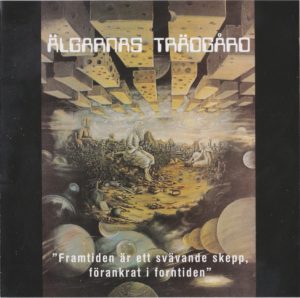 Älgarnas Trädgård were late hippies from Sweden who concocted the puzzling and oddly orchestrated suites of Framtiden Ar Ett Svavande Skepp Forankrat I Forntiden/ The Future is a Hovering Ship Anchored in the Past (1972 – Silence, 2006). The six-member band played all sorts of acoustic and electric instruments (including synthesizers) and alternated between King Crimson-ian jamming, Pink Floyd-ian fugues, exotic chamber music a` la Third Ear Band and freak-outs a` la Red Crayola. The album runs the gamut from the frantic and loud Rings of Saturn to the hypnotic and funereal The Future is a Hovering Ship Anchored in the Past, and culminates with the acrobatic sonic montage of Two Hours Over Two Blue Mountains with a Cuckoo on Each Side, of the Hours.
———
What a totally strange and unusual group Älgarnas Trädgård is. This Swedish group, consisting of young, long haired hippies, released this album entitled Framtiden Är Ett Svävande Skepp, Förankrat i Forntiden in 1972, on a small Swedish label called Silence (the same label that brought you Bo Hansson).
What would happen if the Krautrock scene happened in Sweden, rather than in Germany? Can you imagine what would happen if bands like Ash Ra Tempel and Amon Düül II were Swedish and included Nordic folk influences? Then Älgarnas Trädgard would that answer!
The band consisted of Jan Ternauld, Dennis Lundh, Sebastian Öberg, Mikael Johansson, Andreas Brandt, and Dan Söderqvist, in which they played such odd combination of modern, archaic, and exotic instruments as violins, rebec, cello, guitars, sitar, piano, zither, organ, flutes, zinks, jew’s harp, tablas, and synthesizers (Moog, VCS-3).
Jan Ternauld is also an artist, and he did the covers to a couple of Bo Hansson’s albums (Magician’s Hat, Attic Thoughts). Unsurprisingly, he did the cover to this album as well. Ternauld these days mostly creates computer generated artwork, instead of the old-fashioned way like he did for Älgarnas Trägård and Bo Hansson.
Most of the songs on the album bear very lengthy titles like “Two Hours Over Two Blue Mountains With a Cuckoo on Each Side of the Hours… That Is”. That cut starts off with bells ringing, strange electronic effects, jamming on violin, and eventually ending up with some even more bizarre electronic effects that sound like they came off a very early Tangerine Dream album (like Alpha Centauri). The second cut, “There is a Time For Everything, There is a Time where Even Time Will Meet” is an odd, Indian influenced number, lots of sitar, violin, and tabla, ending with a truly mystical sounding zither.
“Children of Possibilities” is one of only two cuts with vocals (the rest are instrumental), this time with non-member Margaretha Söderberg handling the vocals. The vocals are in Swedish, and it is a truly amazing piece influenced by Swedish folk music (for all I know, it’s a Swedish folk song, but no credits are made to who wrote these songs).
“La Rotta” is basically a very cool Nordic type song played on fiddle, not unlike the fiddling you hear from Celtic music. The next cut, with vocals (in Swedish), “Viriditas” is the epitome of underground spacy psychedelic. More great violin work, vocals that sound out of tune (which adds to the charm), odd sounding piano, and obviously sounding like it was recorded on crummy equipment giving the song that unique early ’70s feel.
The next song, “Rings of Saturn” is a totally killer guitar jam and is by far the most rock-oriented number. Pretty intense stuff here, reminds me of Ash Ra Tempel. The final song, “The Future is a Hovering Ship Anchored in the Past” is mainly violin with strange electronic sounds, pretty creepy.

Tracks 1 to 7 recorded at Studio Decibel 1971 by Torbjörn Falk with great patience.
Bonus tracks 8 and 9 are unique live material recorded at Museum of Art in Gothenburg in Fall 1972 by unknown.