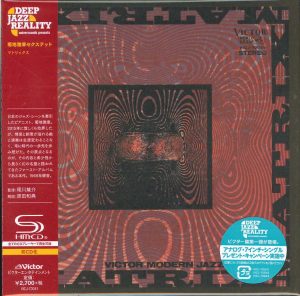 Recorded in 1969, best known under the 1977 US reissue by Catalyst Records, Matrix is the first album as a leader of Masabumi Kikuchi featuring Tetsuo Fushimi & Hideyuki Kikuchi (if one ignores the album duet with Terumasa Hino in 1968). Matrix is obviously a masterpiece, released after significant experience years as sideman, close to various Jazz masters, it was conceived, reciprocally, on the saxophone overtones occurred by Hideyuki Kikuchi alongside Akio Nishimura on tenor. The track list constits in great variations selection of standards & covers rearranged with brio by Kikuchi, from Chick Corea (the amazing piano run “Matrix”), the modal “On A Green Dolphin Street” (based on the 1958 Miles Davis version), the Jazz Rock Baroque (Kikuchi using harpsichord) “If I Said The Sky Was Falling” composed for the TV drama “Matte Masu Wa” by Sadao Watanabe, and the bossa “Black Orpheus” composed by Luiz Bonfa, including two own compositions that completes magnificently the album : the original ballad, reminiscent of John Coltrane, “Little Aby”, & “In Fourth Way”.