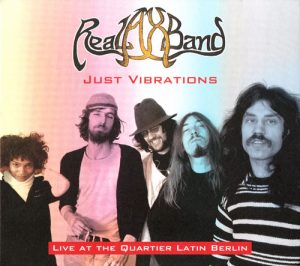 40 years after the first LP release, the Real Ax Band is back in action: in April 2018, the CD ‘Just Vibrations – Live at the Quartier Berlin’, is released, a live album, which was recorded in the Berlin ‘Quartier Latin’ in April 1978. For decades this club was one of the mist important venues for Jazz, Rock, Fusion, World and Blues in Berlin.
Today it is again named ‘Winter Garten’ as during Berlin’s roaring 1920s. ‘Just Vibrations’ is a rare musical document- reflecting very much the Zeitgeist of Germany’s 1970’s. It was never released before and shows how the group refined their Style from being part of German Krautrock to become a vital part of European Fusion Music.