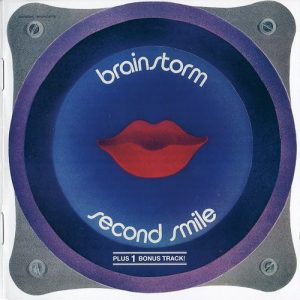 BRAINSTORM is an early 70’s fusion quintet from Baden-Baden whose influences range from ZAPPA to SOFT MACHINE, CARAVAN and SUPERSISTER. Made up of unusual and highly complex harmonies, their music is dynamic and features lots of sax, flute and (distorted) organ. Although most of their albums are instrumental, their eccentric sense of humour surfaces at times in the form of quirky vocalizations a la MOTHERS OF INVENTION and GONG (they once called themselves FASHION PRICKS but got into a bit of trouble when they tried to sign a record deal, so they switched to FASHION PINK and then eventually became BRAINSTORM). The core of the band is made up of a trio of schoolmates with conservatory training: Roland Schaeffer on sax, vibraphone, guitar, bass and vocals; Eddy von Overheidt on organ, piano and vocals; and Joe Koinzer on drums and percussion.

Their discography comprises two studio and two lives albums plus a compilation disk. “Smile a While” (1973), their first studio release, shows some SOFT MACHINE leanings whereas “Second Smile” (1973), a bit more diversified, is somewhat reminiscent of Dutch band SUPERSISTER. The sound on both live albums, “Brainstorm Live Bremen” (’73) and “Last Smile” (’74), is exceptionally good – the latter was specifically recorded for a West German radio show. Finally, “From Fashion Pink to Brainstorm” (2001) is a compilation of their early material, from their FASHION PINK days.