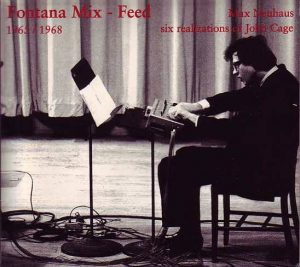 Harsh noise in the concert hall; one can only imagine the impact of Max Neuhaus’ realization of John Cage’s open score “Fontana Mix” back in 1965-1966. An overtaking slab of not-quite-controlled feedback, his piece (subtitled “Feed”) consisted of a set of parameters determined through the chance operations prescribed by Cage’s score. He chose to use contact microphones resting on top of tympanis. The instruments are placed in front of loudspeakers. The ambient sound of the room triggers the first reactions; sonic entropy does the rest. Neuhaus sits at a mixing desk, controlling the potentiometers of four channels of feedback, changing them according to his realization of the score. The piece ends when he gets up and switches off the amplifier: The feedback loops disintegrate. In each live performance the piece takes a different form, as the feedback loops are influenced by many factors (the size of the room being the most drastic) that are not all controllable. Sometimes the piece remains quiet, humming gently (although still forcefully — the feedback engulfs the whole room, coming from all directions at once, and its multi-layered nature gives birth to a number of subcurrents of sounds). In other situations it roars, one wave of feedback crashing over the other in an assault that must have left audience members breathless — and temporarily deaf! The original LP, released in the last days of 1966, presented four versions of the piece, recorded live between April 1965 and December 1966.