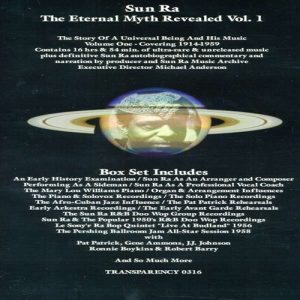 It is not an exaggeration to say that this lavishly illustrated and annotated 14-CD box is an essential addition to the shelf of every single hardcore Sun Ra fan as well as musicologists and critics. The Eternal Myth Revealed, Vol. 1 was carefully curated, assembled, annotated, and sequenced by official Sun Ra Music Archive head Michael D. Anderson and issued on his Transparency Records imprint. It traces the musical roots of Sun Ra from his earliest years up to the end of the 1950s. This is accomplished via interviews and narration by Ra, his sidemen, musicologists, historians, and other Sun Ra aficionados, as well as presenting musical selections by Ra’s many influences, his contemporaries, and his own early recordings as both an artist and producer, not only in jazz, but in rhythm & blues, doo wop, poetry, blues, and more. What Anderson accomplishes by this approach is to inseparably link Ra’s music to his musical peers and the development of avant-garde jazz, of course, but also indisputably to swing, bop, progressive big band, hard bop, and popular music itself. The package is spread out over nearly 17 hours, taken from a wealth of 78s, 45s, and even unreleased session and interview tapes, and feels like an obsessively documented, utterly engaging radio broadcast — so much so that the Smithsonian should seek Anderson’s collection out for enshrinement in its own archive. The CDs in the box come packaged with a 132-page 5″x10″ book that follows the CDs via writings, photos, and even label scans; it is contained within a large, beautifully decorated longbox. Like other offerings on Transparency, the price tag is a steal, though the edition is limited. The Eternal Myth Revealed, Vol. 1 is a true event in the ever growing body of work that makes up Sun Ra’s legacy. It is a true testament to critical and historical scholarship that establishes him as not only an innovator of truly iconic status in the musical sense, but in the larger context as one of the 20th century’s true cross-cultural innovators. by Thom Jurek